(About the length of a great pop song)

There are three requirements for a corporate retreat:

at least one “lesson” from Steve Jobs.) Edgy provocateurs love to cite Hitler as a “bad man, certainly – but a great leader.” (Spoiler alert: No, he was an incompetent manager. And, well, also pure evil.)

It’s hard to imagine how any of them would fare in today’s workplace. Sir Winston’s cigar smoke is disqualification enough. To (literally) shake things up, we need leaders primed for a more modern era – like the frontman for rock n’ roll’s Foo Fighters: Dave Grohl.

There is no definitive and complete inventory of leadership skills, but some are key. And on those, Dave rocks.

Go On and Have It All:
Great Leaders Focus on Results

By any objective measure, Dave Grohl’s career is a smashing success: a key role in one of the most influential bands since the days of Ed Sullivan, followed by forming a group with 11 Grammy Awards (and 29 nominations), selling over 30 million records (during a time the industry collapsed). Grohl’s goals are more than just gold – he wants to make great music. Though sales, awards, and sold-out baseball stadiums attest to the popularity of his music, he pushes theband in different directions to accomplish his objectives: A recent album was captured on magnetic (analog!) tape in his garage; its follow-up was recorded in different cities across America, collaborating with local icons; for their most recent, he brought in a new production team – and everyone from Justin Timberlake to Paul McCartney to contribute.

Elementary students are graded for effort; leaders are scored on accomplishment. Anyone who has ever strapped on a guitar knows how to keep score: money and fame. Grohl has certainly achieved that. (If only firing up Excel inspired the same level of fan devotion and conspicuous lavishness….)

Bringing in outside talent – even temporarily – is a way great leaders infuse their organization with new ideas (this message brought to you by consultants everywhere). Keeping diverse resources focused on outcomes can be an issue, and challenging oneself and others to try new things and push the envelope does not guarantee success. Strong sales can make any organization complacent; a good leader inspires his/her teammates to experiment and work outside their comfort zones.

After a rocky start, Foo Fighters’ lineup has been stable for nearly 18 years – in fact, it’s expanding. Grohl cultivates a sense of community and collaboration – publicity and songwriting credits chiefly belongs to the band, not one man. Grohl is in charge, but he shares the spotlight. There’s no need to flaunt it or serve his particular ego.

There are no sordid tales of wanton parties and lascivious groupies on tour buses; in fact, it’s almost the opposite. “Take Your Daughter to Work Day” isn’t an occasional curiousity; band member’s children are frequently spotted hiding behind amps during shows, and Grohl’s eight-year-old daughter delighted a summer audience when she sat in on drums.

The night before headlining a huge festival, band members roamed the Fairgrounds with their families, enjoying carnival rides and dancing to live music.

If Everything Could Feel This Real Forever:
Great Leaders Maintain Customer Focus

When was the last time someone posted a selfie with Bob Dylan? Or Jeffrey Immelt? Grohl knows that a clear line of sight to the customer is an ingredient of success, so he’s always ready to take a moment to make a fan’s (customers) day – including hitting the waterslide at the aforementioned festival.

To launch a recent tour, the band celebrated its garage-rock roots and literally played suburban garages and cul-de-sacs (probably pissing off a few neighbors in the process).

Of course, a rock band doesn’t have a true “inverted pyramid” structure, where customer needs drive the focus. But making time to engage with customers, and understand what they need from the product, and find unique and differentiating ways to deliver it – that’s a great start.

Done, and On to the Next One:
Great Leaders Continually Reinvent Themselves

“What I really want to do is direct” is a cliché, of course. Grohl has become the “Ken Burns of rock” for directing two documentaries – one an homage to an historic recording studio, the other an HBO series celebrating the history of American music.

In some circles, that could be called “extending your 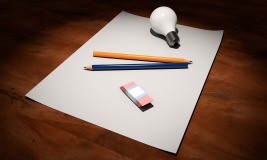 brand” – something great leaders are always looking to do. It can be exciting to see a leader become passionate about an idea and follow it through, especially when it’s outside his or her normal competencies. (After all, that PayPal guy is building rocket ships). It can be risky as hell – failures are very public – but inspirational, as well.

Foo Fighters’ origin story is built on set back: After Nirvana frontman Kurt Cobain killed himself, drummer Dave poured his grief into recording a collection of songs, playing every instrument himself. He shared that cassette with some industry folk, and the rest – as they say – is history.

A solo, self-contained project doesn’t demonstrate leadership (in fact, it can be the opposite); but great leaders manage set backs. They rationally work through alternatives and align resources to move forward. They don’t panic, and they don’t let their team see fear.

Tensions were high during the production of their fourth album. The band ultimately decided to take a break, threw away millions of dollars’ worth of recordings, and start fresh.

When projects turn sour, poor managers swap out resources – or tell the team to “figure it out” and “double down” or suffer consequences. Great leaders know that sometimes all it takes is a recharging of the batteries for the team to refocus and succeed. Sometimes a little bit of resolve is all it needs.

Getting the Best of You:
Great Leaders Inspire Others

Rolling Stone magazine recently called Grohl “the Tom Hanks of rock and roll”. Rarely is heard a discouraging word about Dave. He frequently guests on others’ records (and has stepped in to save shows), and the list of people who have contributed to his is astounding – McCartney and Timberlake, sure, but also members from bands as diverse as Led Zeppelin and Preservation Hall Jazz Band. Legends and up-and-comers alike join the band onstage, and everyone just seems to genuinely like the guy.

Being liked is not an essential component of leadership – but it doesn’t hurt. Great leaders engage their colleagues, peers, and even competitors – they inspire, provide feedback, and provide confidence. They maintain trust and keep private discussions private.  Recognizing others, allowing them room to grow and achieve, builds respect and loyalty. And that is great leadership.

There’s a reason why particularly engaging leaders – the Jeff Bezos and Mark Cubans of the world – are called “rock stars”. And that’s because rock stars rock. 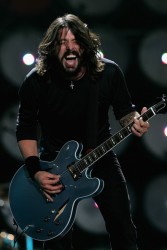 Do you want this guy leading your strategic projects or launching your latest go-to-market initiative? Even if he could pass your dress code, probably not. But his poise, attitude, and commitment to both his art and his team provides lessons that we can all apply.

Looking at rock stars, particularly when they act like rock stars, it is difficult to picture them as youths, spending thousands of hours alone, practicing scales, getting chords wrong, changing strings and trying to overcome their fear of failure. But they put that time in to hone their craft, and it paid off.

“Good Leadership” doesn’t require a divine muse; there are basic skills and habits that anyone can develop. Not everyone will be their industry leader, but by practicing these skills, we can all do a better job guiding our teams and having positive impacts.