I volunteered at the Chamber of Commerce’s barbecue fundraiser. Hoping to work the smoker, instead I was on the service line:

when handed a plate with slaw and beans, I was to plop a scoop of barbecue and pass it to the teen who would drop a roll and butter on it, before it passed through cookies, napkins, and eventually to the diner. My reptilian consultant brain was overjoyed by the one-piece flow of it.

I was “trained” by the guy I was replacing. “How much do I give them?” I asked. “Oh, a good amount.” Uh, thanks for clarity! When pressed, he added, “I was told to give them a ‘full ladle.’”

Turns out, all the ladles were different sizes. Gary, serving next to me, said, “I like to give them a scoop about the size of an orange.” To demonstrate, he held his hands grapefruit-width apart; his ladle was the size of a tangelo.

Rick, when bringing trays of meat from the smoker, would look over my shoulder and say, “Aw, you ought to give ‘em more than that.”

Patty, an excitable woman with nowhere near enough to do, would pop over and shout, “Eight ounces! Only give them eight ounces!” Easy-peasy, Patty! Where’s the scale? 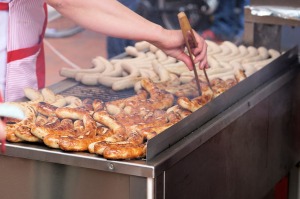 Jeff, from the “Meat by the Pound” booth would bounce over: “I need one pound!”, “I need two pounds”, and we’d fill to-go containers with no sense how much we were dishing out.

Later, a man with a walkie-talkie and high-vis vest (the uniform of someone In Charge) watched me ladle out some meat. He leaned in: “You know that’s too much, right? You really should use a ladle.” In my most passive of passive-aggressiveness, I scooped the meat off the plate and back into the ladle – a perfect fit. “Do better next time,” he told me.

If you think this is about to become a parable for Why Standard Work Matters, think again.

About three hours before the scheduled end (and long before the band was finished playing a marathon “Fly Like an Eagle/I Will Survive” medley), panic set in – we were running low on barbecue. Thirty minutes later, someone did the meat math and realized there was only enough to feed the pre-sold tickets still at Will Call.

Visi-Vest radioed the Ticket Booth to stop walk-up sales, and instructed me and Gary – “No more, except for Will Call.” Immediately after he left, Patty walked up with four to-go boxes and “had” to have them filled for volunteer shift meals. Gary and I looked at each other – no other volunteers had eaten. Patty said she “had” to feed the people working so hard “for her”.

Rick didn’t help by walking up and sharing, “Oh, I ‘spect it’ll be fine.”

One local hadn’t finished her meal, so she asked a volunteer for a to-go box. Cathy, Patty’s cranky doppelganger, suddenly appeared to snap at the teen: “Don’t give those away! Do you know how much they cost?”

Gladys, also with a radio and in a high-vis vest, stormed the line to rant about the folks who still had not picked up their tickets at Will Call (even though there was still a full two-and-a-half hours left in the event), and was in a desperate state. I suggested, “Why not pre-box the meals for them – at least the cold stuff – and when they arrive, we dish out the meat? This way we can start cleaning and most of the volunteers can go.” Cathy didn’t like that idea, because of the box cost. Gladys and Rick didn’t like that idea, because it would be too much work. Visi-Vest didn’t like it, because it would be “too hard to control who got what.”

After a minute or so of everyone speaking over each other, Gladys snapped her fingers. Eureka! “Why not pre-box the meals for them, and when they arrive, we have it ready for them? That way we can break everything down and the volunteers can go!” Everyone agreed that was just splendid.

Always one to push my luck, I said, “Well why not just do the cold stuff, and keep the meat on the smoker, so they at least get a hot meal?” Gladys let me know that she had been there since 5AM setting up, and wanted everything cleaned now.

Gary and the teenagers had made themselves scarce. I started cleaning up.

So many people in charge! And the woman who volunteered me – the Chamber’s vice president – was nowhere to be found.

It had been a sunny day, with bands playing and neighbors dancing and kids

swinging on swingsets. Naturally, Gladys and Patty tried to determine where it had all gone so horringly wrong. Busy mushing down trashbags, I asked, “Were there more people than expected?”

“Maybe more people came earlier this year than in years past?”

“No,” Gladys said. “Besides, we’d never be able to figure that out.”

Oh, I bet counting Sold Tickets might provide a clue.

When I returned from hauling bags away, Cathy had joined them; consensus became, Everything fell apart because “they were just giving away too meat.” Wait – who’s “they”??? I’m “they!” Everyone agreed, the Meat Guys spoiled it.

Even though they’d run out of butter patties two hours earlier (being a Man of Action, I suggested hitting one of three restaurants in town and buying a box of butter patties; that was kiboshed). Even though they’d run out of baked beans a good 30 minutes before we 86’ed the meat, and no one had seen an extra napkin since Noon. It was our liberal application of meat that did it.

My next trip to the dumpster led straight to the exit and home. My shift had ended an hour earlier, and voluntary overtime seems silly if you’re only going to get blamed for things out of your control.

On the face of it, this was just a pleasant Saturday afternoon wasted. Still, there are lessons to pick from the wreckage of this cartoonish bumbling, on the nature of how to engage employees and make them want to do good work and get shit done. Some call that “leadership”.

These lessons can apply to one-off events such as this (otherwise known as “projects”), as well as to ongoing operations.

Establish a Clear Chain of Command.

The barbecue was a textbook, literal example of “Too many cooks…”

When project managers are not careful, anarchy takes over – for one thing, resources are torn between their line managers and the PM. When assigning work, clear expectations for each deliverable should be delegated to a singular resource – not a team or “you know, whomever”.  That singular point provides both upward transparency (who’s accountable?) and downward clarity (who gives the orders?).

If there’s controversy or confusion, it should be solved behind closed doors and communicated by the primary resource. Think of the paralyzed Incident Manager when a half-dozen vice presidents crash their bridge call and begin barking conflicting orders. Or anyone in a “support” function – such as the poor Marketing Analyst juggling “Number One priority” research requests from one division and “Number One priority” campaign copy from another.

Mixed messages are more than just exasperating: they lead to poor performance. Always. Who should the front line listen to? The guy who says “serve ‘em more meat”? or the woman demanding measurable perfection? Rather than focusing on what’s important to customers, employees try to navigate the conflicts of their (legitimate and perceived) superiors; in post-mortems, everyone forgets that the Gladyses and Visi-Vests of the world contradicted each other, and only remember the “mistakes” made by the guys on the line.

Find Cause, Not Blame. At the Appropriate Time.

At some point before next year’s barbecue, the Committee should figure out why the food ran short. Was the rush earlier in the day than in years past? Did someone under-order meat? Or was portion control out of balance?

Even before that, they should know: Is this how it usually plays out, year after year? Did the townsfolk even care that, after 2:30, it was just sweet tea and cookies?

It should go without saying that, while blaming others makes one feel better in the immediate aftermath, it does

no good for preparing the future. When things are turning pear-shaped, the first reaction should be to recover and get back to normal. Then, when heads have cooled (and hands have been washed), a leader can instigate a rational review of the situation.

It should go without saying. But I’m saying it, anyway.

It’s Not About You.

Blaming the Meat Guys doesn’t get hungry people fed, and it doesn’t make the leader look any more capable. Likewise, no one cares how hard it was to get the fire started or who had to borrow whose truck to get the garbage cans.

Success radiates. Which includes reflecting upward. Good leaders make it easy for the front line to succeed, because that makes everyone look great.

When this plays out:

Hey, that was a great party, Susie.

Really, it wasn’t me – there was a team of folks who made that happen.

Everyone thinks, Wow, that Susie, she’s really something. She fires up the team – and she’s humble. Yay, Susie!

But when this plays out:

Boy, I’ll tell you, Bill, those guys know how to throw a dance.

It was a good thing I was there – I was the one who requested “Fly Like an Eagle”.

Everyone thinks, Wow, that Bill. What an ass. Boo, Bill!

In addition to the constant haranguing about what’s an appropriate amount of meat to serve, there was the whole issue about “Meat by the Pound.” If a ladle is the standard unit of measure, provide a standard ladle; if you want to deliver by the ounce (or pound), you need scales.

Your team won’t succeed without the right tools, in the right environment. That needs to be prepared for in advance. Good project managers sit down with their key resources, and, deliverable-by-deliverable, review what resources are necessary: Tools, equipment, facilities, materials, other skills and talents, etc. A Man of Action routinely verifies with the staff that they have the tools, time, and space to do what’s expected.

This all needs to be built into the plan and budgeted for; winging it is always an option, but then you’ll likely run out of meat.

These may feel like boilerplate, mom-and-apple-pie suggestions. All too often, though, once people find themselves trying to perform in real time, even the most basic concepts – Establish Authority, Share the Spotlight, Provide Tools, Don’t Blame Others – are forgotten.